Q & A with Kimmery Martin

Author of The Queen of Hearts 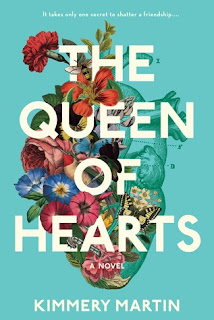 As you know, I recently read and enjoyed The Queen of Hearts by Kimmery Martin.  One part that made me enjoy the experience even more was Kimmery's author notes at the end of the novel.  That brought me into the rabbit hole of checking out Kimmery's social media presence.  Finally, I reached out to her to find out if she would be open to answering a few questions for my blog.  Below are my questions and her responses.

Question: Which character do you see more of yourself in - Zadie or Emma (or maybe one of the others!)?

Kimmery: There is a little bit of me in both Zadie and Emma; like them, I grew up in rural Kentucky, I’m an obsessive reader, and I’m a physician whose children are always devising clever parenting challenges for me to fail. My friendliness and sense of humor are similar to Zadie’s but I share Emma’s fascination with science and sometimes a bit of her awkwardness. The similarities between us do not include any of their flaws, of course ;)

Question: Did you always envision Zadie as a cardiologist & Emma as a trauma surgeon or did their specialties evolve along with the novel?

Kimmery: Well, this is interesting. The original title of the book was Trauma Queen. But the publishers didn’t want the word ‘trauma’ in the title, so my editor and I had to change it. Somehow we came up with The Queen of Hearts, which everyone loved, except for one small problem: Zadie was a pediatrician, not a cardiologist. So I embarked on the 200th revision and changed her to a pediatric cardiologist. Voila! (Emma was always a trauma surgeon, because I absolutely loved my trauma rotations in training and thought it would be excellent fodder for a book.)

Question:  How do you find time for self care when trying to juggle being a mother, writing a novel, being a physician, and all of your other duties?

Kimmery: Mostly I don’t. I let a lot of stuff go. But a year or two ago, I made the decision to put medicine (mostly) on hold to pursue my career as a writer. I still work a little bit, but life is too short to make yourself miserable trying to juggle two very demanding careers if you don’t have to. Writing consumes all my spare time right now—it is a shocking amount of work.

Question: What upcoming release are you most excited about reading?

Kimmery: I have four co-writers on a website called The Debutante Ball, which selects five female debut authors each year to blog about writing topics. I am thrilled that my colleagues books’s are almost here: Cass Morris’s historical fiction From Unseen Fire; Lara Lillibridge’s memoir Girlish: Growing Up With Two Lesbian Parents; Julie Clark’s women’s fiction The Ones We Choose; and Kaitlyn Sage Patterson’s YA fantasy The Diminished.

Question:  How long did it take you to write (idea to finish) Queen of Hearts?

Kimmery: Nine months for the first draft; another year of revision; several years trying to get an agent and a publisher; then another six months of revision. About five years in all.

Question: Did you have any input on the cover design (the cover is probably my favorite of the year!)?

Kimmery:  I LOVE my cover and I had very little input, other than requesting a vintage drawing of an anatomic heart. But the graphic designer nailed it. The blue color is one of my favorites—she chose it because it’s the accent color of my book review website and similar to the color of scrubs. The designer said she used the flowers to make it beautiful, and she chose a mixture of celebratory and funereal blooms to illustrate the circle of life seen in a medical practice. There are some birds and bees in there too ;) Quite a lot of symbolism!

Question:  Are you planning a second novel?  If so, should we expect something similar or completely different?

Kimmery: I was just offered a two-book contract from Penguin for more novels about female physicians. I think one of them will be about a minor character, Georgia, from TQOH who is unjustly fired from her urology practice; the other will be a bit more suspenseful, about an orthopedic surgeon who uncovers a major scandal in her husband’s past. 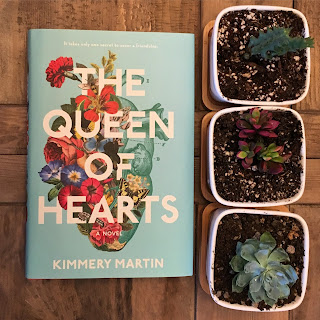 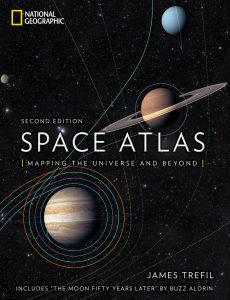 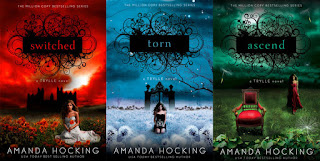